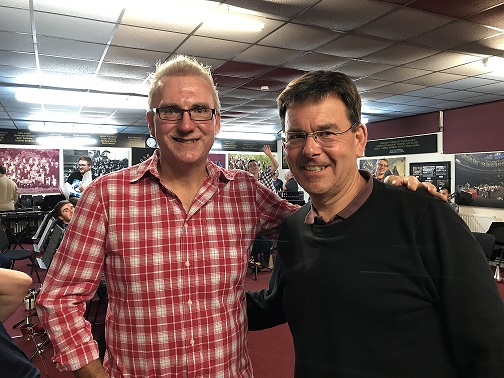 The band recently welcomed the well known Howard Evans to a rehearsal ahead of its forthcoming appearance at the British Open Championship in Birmingham.

Howard is one of the most respected brass band musicians in the UK, with a musical CV that also includes performances both as a distinguished pianist and conductor throughout the world. He also hails from Gilwern, just a few miles from Tredegar, although he left with his family when he was a child.

However, he remains a proud Welshman and returns to stay in Abergavenny with his family most summers - taking the opportunity on this visit to pop up the Heads of the Valleys road to hear the band in action.

It’s a super rehearsal facility for a super band – and hearing them first hand you can immediately tell why they have been so successful.

“It’s lovely to come along and hear the band,” he said. “I’ve been a great admirer of what Ian and Tredegar has achieved and I’ve wanted to come along for some time.

It’s a super rehearsal facility for a super band – and hearing them first hand you can immediately tell why they have been so successful.”

In response Ian added: “It’s always great to welcome guests to the bandroom - and Howard in particular.  He’s such a respected figure in the banding world and having him at rehearsal certainly kept the players on their toes!”