The ‘Brass Splendour: Past Present & Future’ concert appearance at St Paul’s Church in Birmingham this week proved to be both a critical... 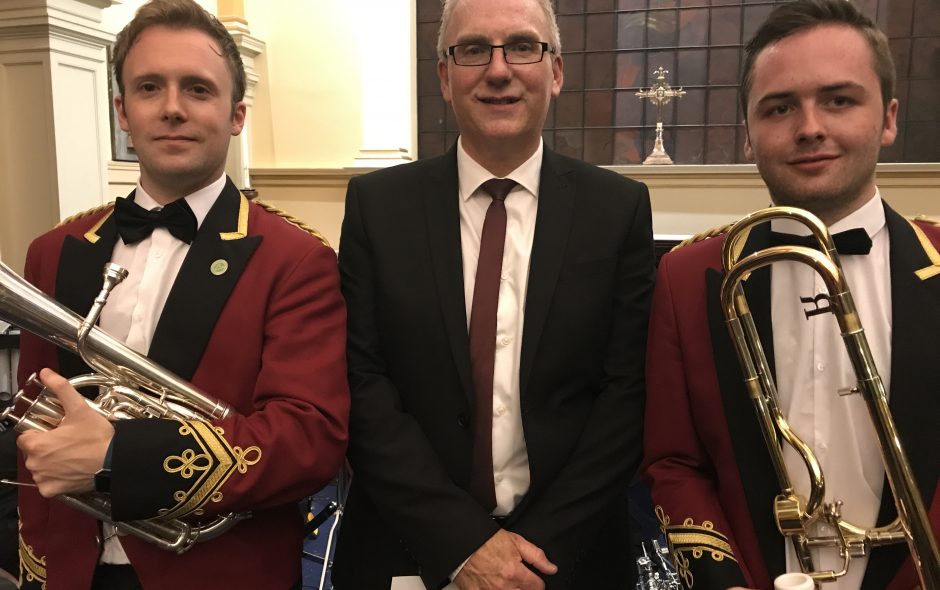 The ‘Brass Splendour: Past Present & Future’ concert appearance at St Paul’s Church in Birmingham this week proved to be both a critical as well as popular success.

The concert was part of Tredegar’s role as ‘Band in Residence’ at Birmingham Conservatoire, and on a particularly warm and sticky evening meant that they certainly lost a few collective pounds in weight in showcasing substantial compositions from the pens of Dorothy Gates, Liz Lane, Oliver Waespi and Herbert Howells.

Two of the band’s star players also deserved a well-earned refreshing drink after being featured in a brace of major solo works.

After delivering a masterclass with students the previous day, Chris Davies performed the rarely heard ‘Tenor Horn Concerto’ by Welsh composer Gareth Wood, whilst solo trombone Ryan Richards, who has just completed his third year studies at the Conservatoire, was featured on Gordon Langford’s ‘Rhapsody for Trombone’.

“Both Chris and Ryan were outstanding,” MD, Ian Porthouse said. “To perform to that standard in such demanding conditions says a great deal about their qualities as musicians.

Ryan has developed so much over the past couple of years with the band and at college, and his performance of one of the key works of the trombone repertoire was excellent. As for Chris - I tend to just smile and wonder how he does it. His rapport with the students during his masterclass was inspirational - and so was his playing on the night.”

“Both Chris and Ryan were outstanding. To perform to that standard in such demanding conditions says a great deal about their qualities as musicians - MD. Ian Porthouse.

He added: “I was delighted with the concert and the immediate feedback we received from an audience who appreciated the opportunity to hear major works such as ‘Pageantry’, ‘Silver Rose’ and ‘Hope’ in the heart of Birmingham.

This was certainly a concert where everyone deserved their post-concert drink or three...!”