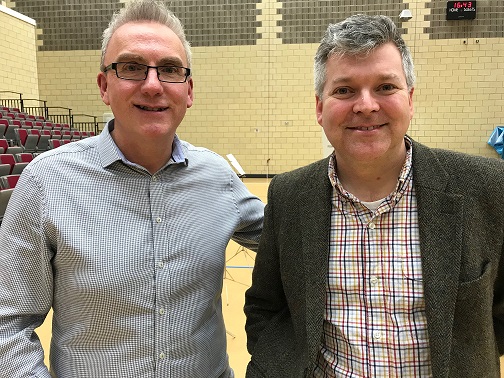 Tredegar certainly played its part in helping the Brass for Africa Charity on the weekend, when they appeared as the featured guests alongside Halle Orchestra principal trumpet player Gareth Small in a concert of the Greater Gwent Youth Band.

The event helped raise £1,000 for the charity which undertakes pioneering educational work in Uganda and Liberia.

Led by Course Director Ian Porthouse at Ebbw Vale Leisure Centre, the full house of heard the band in ‘Calling All Workers’, ‘Gypsy Dance’, ‘Ivory Ghosts’ and ‘Rainbow Connections’, whilst they also accompanied Gareth in sparkling renditions of ‘Virtuosity’, ‘People’ and ‘He Wishes for the Cloths of Heaven’, inspired by a poem by W.B. Yeats and specially arranged for the concert by Gareth’s father Tony, with the blessing of composer Sir Karl Jenkins.

A spokesperson for Greater Gwent Music Services said: “We’ve enjoyed a great week of inspirational tuition and leadership by Ian and the staff, all topped off by Gareth.

Our thanks go to both him and Tredegar Band for giving their services for free to support the Brass for Africa Charity and to the audience and so many former players who came to support the next generation of youngsters.”

Ian Porthouse added: “It’s been a great way to start the year - and for the youngsters to be inspired by such a fantastic player who took time out of a busy international schedule to come here and perform.”

In response Gareth, who has just returned from a month long tour to Germany with London Brass said: “Brass for Africa does such amazing work that this was the ideal opportunity to help back in Wales. Brass banding never leaves your blood – especially when it’s as good as this.”

A spokesperson for Brass for Africa told 4BR. “These are the type of events that underpin the work we are doing. Our thanks go to everyone involved at Greater Gwent Music Services and especially to Gareth and Tredegar for giving of their time and talents for free.”