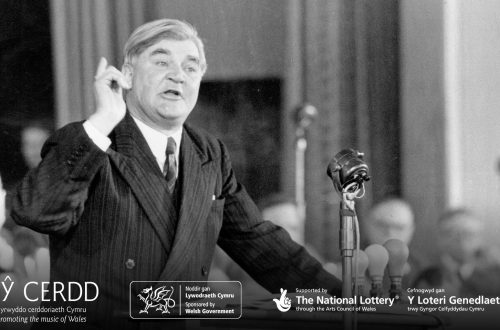 The Labour politician Aneurin BevanOne of the political giants of the 20th century is to be commemorated by Tredegar Band in a new music commission.

Tom Davoren is to write a new work entitled, ‘Silent Voices: A Musical Remembrance of Aneurin Bevan’, which has gained grant support from Ty Cerdd through the Arts Council of Wales and the National Lottery, and which will celebrate the 120th anniversary of the birth of the man who brought the National Health Service into being.

Band Chairman Alwyn Powell said: “Aneurin Bevan was born in Tredegar in 1897 and it was through his upbringing in the town that he became a champion of those whose voices he felt were not being heard.

We wanted to celebrate this truly great figure – a man whose influence has been felt throughout the world.”

Nearly 60 years after his death, there remains no more renowned or influential Welsh politician – someone who described himself and ethos as, ‘…a projectile discharged from the Welsh valleys… when I listen to the cacophony of harsh voices trying to intimidate, I close my eyes and listen to the silent voices of the poor.”

Dr Victoria Winckler, Director of the Bevan Foundation which has also supported the commission from Tredegar Band said: “We’re thrilled that Aneurin Bevan’s legacy is being honoured in this way. He has a special place in the hearts of many in Wales and across the UK as founder of the NHS and of social housing too.

The title of the piece is a timely reminder that, 65 years on from ‘In Place of Fear’, the voices of the poor are still rarely heard in the corridors of power. Tredegar Town Band is to be commended for securing the funding for this very important piece of work.”

The title of the piece is a timely reminder that, 65 years on from ‘In Place of Fear’, the voices of the poor are still rarely heard in the corridors of power. Tredegar Town Band is to be commended for securing the funding for this very important piece of work – Dr Victoria Winckler, Director of the Bevan Foundation

In Place of Fear

Tom Davoren has taken his inspiration from Bevan’s 1952 book, ‘In Place of Fear’, drawing on three specific quotations to inform each movement of the work, which will be written to be played either as a whole or in its constituent parts.

“This is such an exciting project to be involved in,” he said. “The link between Bevan and the town of Tredegar remains so strong and revered even to this day. The work will reflect that as well as with partnership links to reach new audiences throughout the UK and Europe.”

Tredegar MD Ian Porthouse added: “We are delighted to be able to undertake this commission with Tom and especially with so much goodwill and support from the people of the town. I’m sure it will literally be a ‘projectile’ that will make a mark wherever it will be performed!”