Our latest bit of Talent spotting...

Tredegar certainly enjoyed another one of their forays into the showbiz world, with their recent performance on ITV’s ‘Britain’s Got… 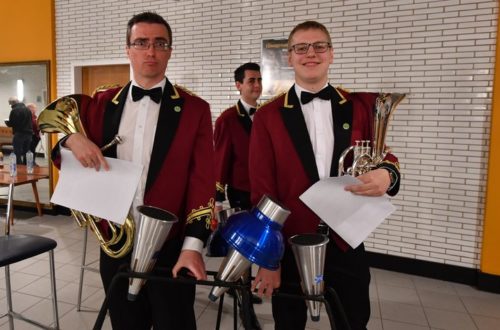 Tredegar's well earned reputation for trying something a bit different has been put to the test again — this time thanks to Simon CowellTredegar certainly enjoyed another one of their forays into the showbiz world, with their recent performance on ITV’s ‘Britain’s Got Talent’ television show.

The band was invited by the producers to take part after they had seen them in action in winning the televised 2016 Band Cymru and National Eisteddfod of Wales titles.

A team from the show subsequently came to Tredegar to film their preparation and then followed them on their live performance in Birmingham for a show that was eventually broadcast last weekend.

“It was all a bit surreal,” MD Ian Porthouse said. “To be asked was one thing, but then to come up with an idea, choreograph it and then perform it on stage against acts that ranged from the brilliant to the bizarre was certainly different!

We came up with a twist on ‘All Night Long’ and it worked. We were still all a little bit surprised to get four ‘Yes’ votes from the judges — including Simon Cowell, but they all felt it was different and fun. David Walliams even came up on stage for some of the extra filming that was required and played along with the band.”

The players were also asked to be part of the ‘Britain’s Got More Talent’ companion programme hosted by presenter Stephen Mulhern which formed the main broadcast of the band’s participation.

“Now that was different,” Ian said. “He asked us to play along with the ideas they had, which was no problem.

Having worked on the film ‘Pride’ we knew it would be long, odd, exhausting but fun — and it was! What resources go into making a programme like ‘Britain’s Got Talent’ though is bewildering — no expense is spared.

The band has a well earned reputation for exploring new musical avenues and this was certainly that and more.”

The band has a well earned reputation for exploring new musical avenues and this was certainly that and more -MD, Ian Porthouse