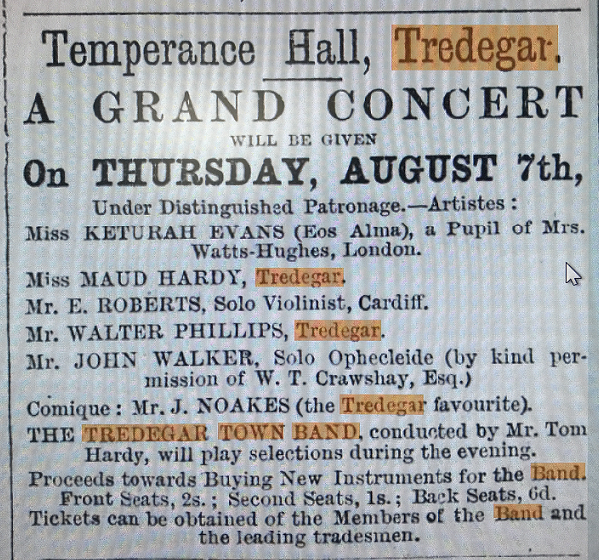 Ongoing research as part of the band’s Heritage Lottery Fund project continues to unearth plenty of great treasures from a proud, and occasionally, contentious history.

Not only has perhaps the earliest recorded contest adjudication been found, but so too have a number of intriguing newspaper articles and correspondence.

The latest brace comes from 1884, with a spirited letter in defence of the band following a report on a march and demonstration as well as an advertisement for a forthcoming ‘Grand Concert’.

A letter of correspondence was addressed to the Editor of the South Wales Daily News on Friday 22nd August 1884 under the heading ‘The Mendacity of the Western Mail’.

Anonymously signed by ‘One of the Audience’, it attacks the newspaper’s recent report that stated Tredegar Brass Band was ‘less musical but a more noisy band than the one that led the Rhymney contingent’.

The unknown supporter of the band writes: “Knowing that it would be futile to expect the Mail to insert a contradiction, may I call attention to their report of the great demonstration on the Franchise Bill which took place at Tredegar on Tuesday?

It stated that the Tredegar Brass Band, which headed the Tredegar contingent, was less musical but a more noisy band than the one which led the Rhymney contingent."

Not satisfied with willful misrepresentations, not only regarding the Tredegar demonstration, but also every other Liberal meeting, they must needs make an insidious attack upon the band which has distinguished itself by taking prizes at brass band competitions at Wrexham and other places.

To show their utter recklessness for friend and foe, they were in gross ignorance of the fact that some of the most prominent members of the band are Conservatives.

They also state that there were between 3,000 and 4,000 present, whereas 10,000 would be nearer the mark, and nine out of every ten were working-men, who sacrificed a day's work to assert their rights and to protest against the arbitrary and despotic conduct of Lord Salisbury.

I beg to thank you for your faithful account of the meeting, only that I think that your estimate of those present is under the mark."

ONE OF THE AUDIENCE

Not satisfied with willful misrepresentations, not only regarding the Tredegar demonstration, but also every other Liberal meeting, they must needs make an insidious attack upon the band which has distinguished itself by taking prizes at brass band competitions at Wrexham and other places.

Meanwhile, a month earlier the band had placed an advert in the Merthyr Express newspaper (above) for ‘A Grand Concert’ to be given at the Temperance Hall in Tredegar on August 7th – the proceeds of which were to go to the purchasing of new instruments for the band.

A GRAND CONCERT WILL BE GIVEN ON THURSDAY, AUGUST 7th,

THE TREDEGAR TOWN BAND, conducted by Mr. Tom Hardy, will play selections during the evening.

Proceeds towards Buying New Instruments for the Band.

Tickets can be obtained of the Members of the Band and the leading tradesmen.

Interestingly, one of the featured soloists was to be the renowned ophecleide player John Walker who played with the famous Cyfarthfa Band.

One can only wonder what jokes the ‘comique’, Mr J. Noakes, labelled as ‘the Tredegar favourite’ came up with...