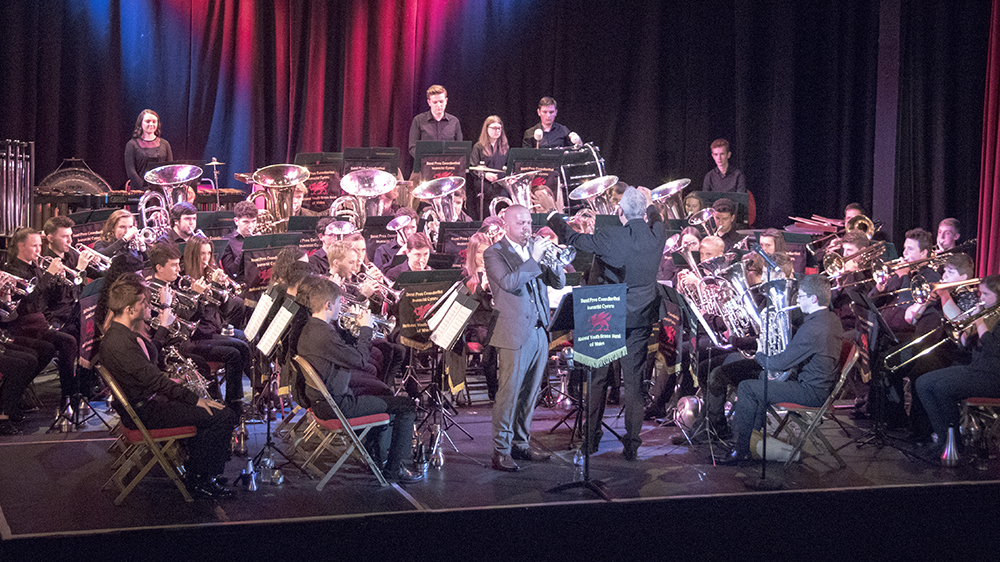 Principal cornet player Dewi Griffiths will swap the soloist’s spotlight for the television lights this week as he heads off to Anglesey to undertake his dual roles as Eisteddfod Fanfare Trumpeter and S4C brass band pundit.

It comes after he gave a superb performance (above) of the hugely demanding Edward Gregson ‘Cornet Concerto’ in Porthcawl as the guest soloist on the National Youth Band of Wales course, led by MD, Ian Porthouse.

“It’s hard to come up with the superlatives for Dewi and his playing,” Ian said. “He’s simply one of the world’s great cornet players. His performance was phenomenal and he was an inspiration to all the players on this year’s course.”

He’s simply one of the world’s great cornet players. His performance was phenomenal and he was an inspiration to all the players on this year’s course - Ian Porthouse

For Dewi, the delight of being asked to be the guest soloist with the band he was part of as a youngster also came with a great deal of pride.

“I never thought that when I was playing third cornet on my first course I would one day be the guest soloist. It’s great that the band continues to flourish and I’m very proud that I’ve been able to play a small part in that.  It was an excellent course under Ian and the music was challenging not just for me!”

Dewi can now be seen alongside his friend Paul Hughes dressed in their ceremonial outfits as they play their part in the great set-piece ceremonies during the Eisteddfod week, whilst he will also be seen in the television studios as one of the expert pundits giving his opinions of the playing in the various brass band contests and competitions.