Tredegar has just returned from a highly successful weekend working with musicians and student bandmasters at The Royal Military School... 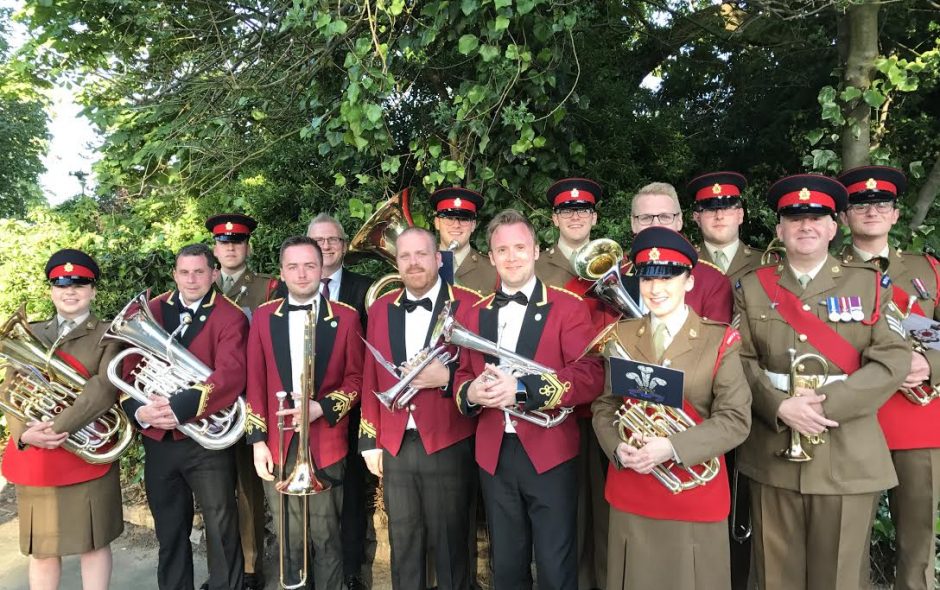 Tredegar has just returned from a highly successful weekend working with musicians and student bandmasters at The Royal Military School of Music at Kneller Hall.

Ian Porthouse and a team of players enjoyed a day leading masterclasses and tutoring on the Friday with players from the three professional bands of the Corps of Army Music - The Band of the Royal Cops of Signals, The Band of the King’s Division and The Band of the Prince of Wales Division.

Concert in the Park

24 hours later the full band joined forces alongside musicians from Rendle VC Troop of the Royal Military School of Music to perform a special ‘Concert in the Park’ on the famous ‘Rock’ bandstand, much appreciated by a large audience who sat and enjoyed the music along with their picnics and bottles of Prosecco and beer.

The programme featured each of the student bandmasters conducting works as diverse as the Berlioz overture ‘Le Corsair’ and Holst’s ‘A Moorside Suite’, as well as lighter items such ‘Disney Fantasy’ and ‘Enter the Galaxies’.

Principal cornet Dewi Griffiths thrilled everyone with his stunning playing on the Arturo Sandoval screamer ‘A Mis Abuelos’ (the third time he had performed it that day!), whilst the concert was rounded off with Respighi’s ‘Pines of Rome’ – complete with fizzing fireworks.

Major E E Frost, the Chief Instructor of The Royal Military School of Music later stated: “I have also received many favourable comments from site staff and other people at the concert, where the overwhelming feeling was that it was the best Brass Band concert at RMSM yet…

The inclusion of Tredegar was a significant plus and I enjoyed meeting and working with Ian and his team. Their contribution was particularly noteworthy and I know that the MDC were hugely appreciative of Ian’s advice and manner while he was working with them.

Equally, the quality of Tredegar Town Band’s musicians was really impressive, with Dewi Griffiths’ solo being a particular highlight for me.”

I have also received many favourable comments from site staff and other people at the concert, where the overwhelming feeling was that it was the best Brass Band concert at RMSM yet…

In response Ian Porthouse said: “Our thanks go to Colonel Barry Jenkins, Director and Commandant at Kneller Hall, and Capt Paul Collis-Smith, Director of Music at The Band of the Prince of Wales Division for inviting us to be part of such a wonderful project and event.

It has certainly strengthened our links with the Corps of Army Music, and it was a pleasure to work with musicians of such professionalism. The depth and quality of their musical talent is remarkable.

The concert was superb – and what a backdrop and acoustic. This was a real highlight for the band and one that we hope to repeat again in the future.”