This is thought to be the earliest formal picture of Tredegar Band from 1904, and probably taken in Bedwellty Park in the town, where it is assumed the band was going to, or had just, performed a concert.

The conductor is Eli Shaw, a remarkable musician born in Barnsley in 1882, and the youngest of five brothers all of who played in various brass bands.

Eli played cornet with the Denton Original Band when in 1900 they became the first ever National Champions of Great Britain at the famous Crystal Palace in London.

He first came to Tredegar in May 1904 seeking employment and the opportunity to become both principal cornet and bandmaster. In his handwritten application letter (in pencil) he stated that his teachers were the Alex Owen and William Rimmer (two of the greatest figures in the banding world at the time), who he said he had ‘gained a great deal of experience’.

Young Eli is of a quiet and unassuming disposition, and has made many good friends, and of blessed with good health has a bright future - British Bandsman newspaper, April 1905.

He was appointed to the roles with Tredegar Workmen’s Town Band at the beginning of 1904, with the British Bandsman weekly newspaper reporting on his appointment in April 1905 by saying: 'Young Eli is of a quiet and unassuming disposition, and has made many good friends, and of blessed with good health has a bright future’.

He remained as conductor and player for the next 30 years.

Through research at the Gwent Archives, it has been found that Eli Shaw died, aged 62, on 14th January 1945. His funeral service took place at St James Church, Tredegar on 18th January 1945. 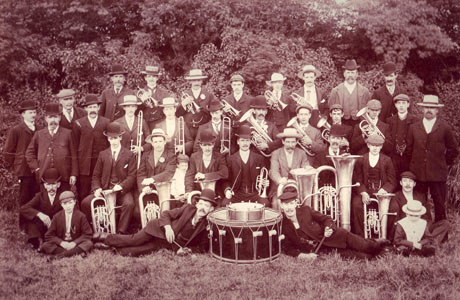