The name of Thomas Hardy first appears as conductor of the band in a Western Mail newspaper report in July 1877, about the annual sports day races held at Wainypond in Sirhowy in Tredegar.

It stated: ‘The Tredegar Prize Band, led by the now bandmaster, Mr T Hardy, of the cavalry depot, played choice elements of music during the day.’

Over the next 20 years his name is associated with the band at concerts, processions and competitions.

Hardy was born in Dundalk with Army records later showing that he was a Trumpet Major in the Cavalry Depot Staff.

He seems to have been based at a number of locations during his military career (his daughter was born in Edinburgh and his son in Kent), but following a period of ill health in which he was admitted to the Royal Hospital in Chelsea (Regiment number 1256), he was pensioned from service on 26th December 1876.

A little while later he moved to Tredegar, and in the 1881 census, aged 42, was living with his wife, Margaret (born 1844), and children Sarah (11) and Benjamin (8) at 7, Alexandra Place in the town.  His occupation is noted as ‘Bandmaster Pensioner (Army)'.

He also appears to have kept his connection with the Army; becoming Bandmaster at the Monmouthshire Volunteer Band in 1880, and in 1881, the 2nd Monmouthshire Rifles Volunteers - both based in Tredegar (leading to a number of newspaper reports confusing them with Tredegar Band).

In April 1882 he resigned as Bandmaster of the F Company of Volunteers at Tredegar to take up what was described as ‘…a more lucrative post in Risca’.

The 1891 census saw him (stated as being 52 years of age) living at 21, Alexandra Place, with his wife, daughter (now an assistant school mistress) and son (now a fitter).

In 1893 it was reported that he was a committee member of the South Wales Brass Band Association that ‘looked into contest protests’, whilst his last contest appearance that can be found with the band at present is in July 1892 at Merthyr Tydfil.

Records show that Thomas Hardy died aged 59, and was buried following a service at St Sannau Church in Bedwellty on the 21st April 1898.

The image comes from the 1881 Census for Tredegar. It shows his occupation as being noted as ‘Bandmaster Pensioner (Army)'.

The image is provided courtesy of the Gwent Archives in Ebbw Vale. 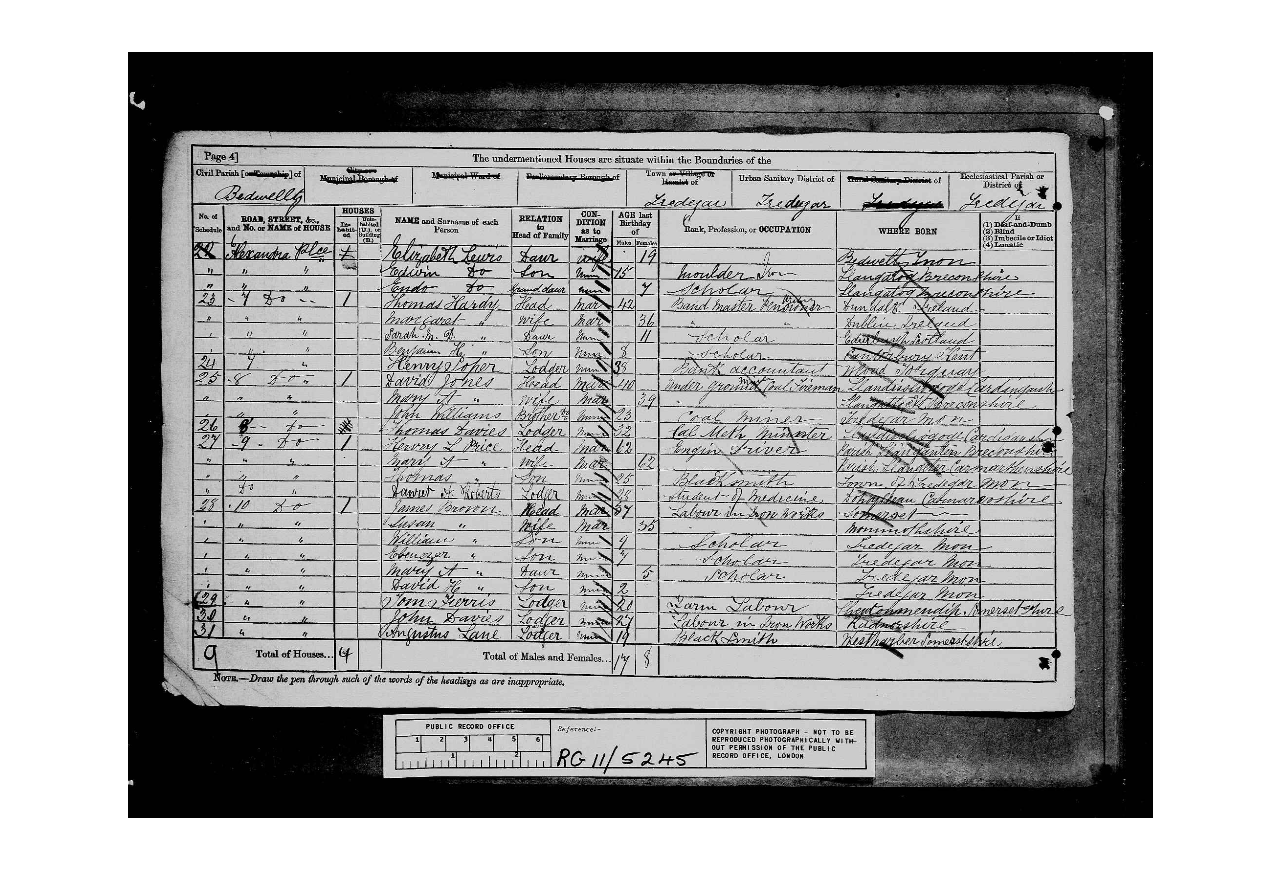