The Glory of Victory composition - 1946

The end of the Second World War was marked by a communal outpouring of both celebration and relief.

And whilst VE Day was officially on 8th May 1945, communities sought to mark the occasion in their own way over the following months with celebration concerts and events held as ‘normal’ life returned, despite the continuing deprivations of rationing.

The regular Bedwellty Park bandstand concerts in the town also resumed, where the first performance of this special ‘Tone Picture’, ‘The Glory of Victory’ by the celebrated Welsh brass band composer T. J. Powell was premiered in 1946.

Powell was born in the town in 1897 and was a member of Tredegar Workmen’s Band prior to the First World War. He later became the conductor of the impressive Melingriffith Band and a prolific composer, especially of marches.

This led to the great Harry Mortimer referring to him as ‘The Welsh Sousa’- with his bold compositions such as ‘Castell Coch’ and ‘The Contestor’ still played to this day. He died in 1965, whilst conducting the Cory Band in a radio broadcast.

The genesis of ‘The Glory of Victory’ remains unclear, but in 1948, a joint concert was held in Tredegar with the Melingriffth Band , conducted by Powell.

It featured the work, which was curiously written on paper that was marked as being the property of Falmouth District Council, in Cornwall (Powell was posted to the area during his time as a Bandmaster in the Royal Marines).

According to the concert programme notes, it was written, ‘...to portray a people’s determination to overcome the distrust, unrest and warlike tendencies which beset our world. This noble determination, coupled with a prayerful appeal to Heaven, leads to a glorious victory which culminates in the joyful, rollicking finale’.

Following research, the work was unearthed in the band library and rescored on computer so that it could be performed once more.

It will be recorded by the band for inclusion of one of two, free Heritage project CDs. 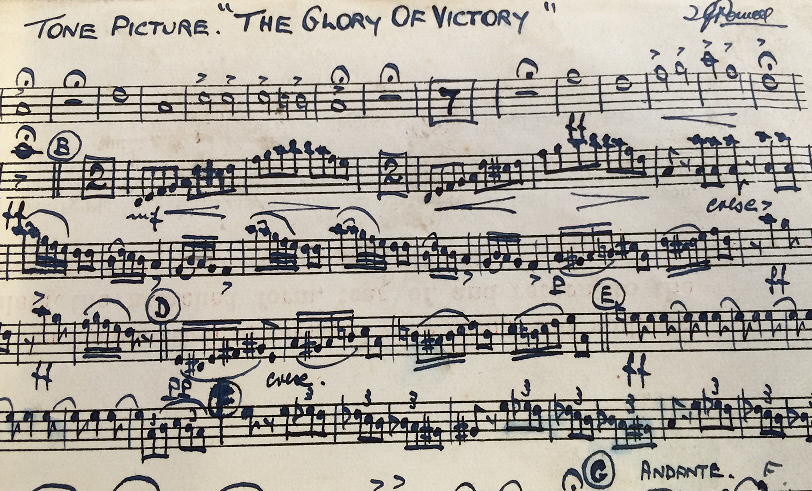