Tredegar Band has a long and proud heritage of being a self-supporting, non-sponsored organisation ever since it was formally constituted in 1876.

Although moves have been made over the years to secure additional financial support, the underlying ethos remains that the band will always be readily identified with the town of Tredegar and the people it represents.

As a result it has meant that there have been times when the financial outlook was, to borrow a modern phrase, one of ‘austerity’, but it says a great deal about the common sense of its elected officers and various committees that the band has always been able to pay its way.

These printed Balance Sheets were presented at Annual General Meetings and show details of the band’s finances for the years ending 31st December 1947 and 31st December 1957. The Statement of Accounts for 1947 saw the band in a sound financial position, especially given that it had just paid for its new bandroom and purchased new uniforms.

The turnover was just over £1,000, ending the year with £68.00 in the bank. Contest successes (three first prizes, a second and a fourth) added the princely sum of £39.00 to the coffers, with the weekly ‘penny rate’ taken from workers at the Tredegar NCB Works adding nearly £100.00, with a further £100.00 coming from the Tredegar Workmen’s Institute.

Expenditure included the annual fee to the Bandmaster of £39.00 and ‘Bandsmen’s Travelling Expenses’ of £28.00, whilst the final page of the accounts also showed the names of those who attended (and how often) the monthly committee meetings.

In contrast, the financial picture in 1957 was a little bleaker, despite turnover increasing to over £1,370.00, and the Bandmaster still being paid £39.00! The ‘Workmen’s Contribution’ amounted to £174.00, with the Tredegar Workmen’s Institute giving another £141.00. Contest successes only added a further £20.00.

However, the loss reported of £194.00 was due in part to the purchase of new instruments costing £314.00, whilst bandsmen’s travelling expenses had risen to £49.00 as a result of attending eight contests.   At the end of the year the band had just under £70.00 in the bank. 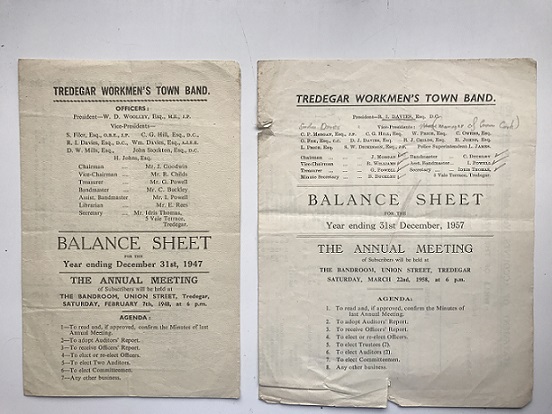