In 1934 and suffering with ill health, Eli Shaw Jnr resigned as Bandmaster of Tredegar Workmen’s Town Prize Band. He had occupied the role for 30 years and still worked full time in Tredegar Works where he first started after arriving from Hollinwood in Greater Manchester to take on the role in 1904.

Although his period in charge did not result in any major contest successes at Class B level (below Championship Section status), the First World War and the severe economic hardships in the south Wales valleys of the 1920s were certainly mitigating circumstances.

However, as can be seen from his handwritten list in ink and pencil, the band did enjoy occasional victories, such as at Pontipridd (sic) in February 1913, again at Aberamman later the same year, and at Blaina in 1914.

With the outbreak of War, the band rarely contested, even locally, and according to some local newspaper reports of the time, was referred to as a ‘Beer & Baccy’ Band - rather reflecting their non-competitive status.

However, in the local newspaper report of his resignation, it was noted that during his tenure, ‘...the band had won 20 prizes and had fulfilled many important engagements at public functions over a wide area’.

It went on to say: ‘Under his able tuition, notwithstanding the difficulties of war time and of subsequent years, the band have been highly successful. The band has established their place as a permanent institution in the town. Their services have been freely given at local functions, pubic and otherwise often gratuitously, while it also occupies a respected position among the bands of South Wales and the West of England.’

After the fallow contesting years of the 1920s, Tredegar appears to have returned to competition in 1929, when they took the rather ambitious step of competing in the Junior Shield A Contest at Crystal Palace, playing a short suite entitled, ‘Romantique’ by Schumann, arranged for brass band.

However, the official contest programme notes that Sam Mounfield, not Shaw conducted on the day, so it can be assumed that he may have played solo cornet (it is noted in the newspaper report that he continued to play). Unfortunately, the band did not come in the prizes.

The experience seemed to herald an upturn in contesting outings though, if not fortunes, with the band returning under his command to London in 1930, 1933 and finally in July 1934 to makes its final appearance with him at the helm at the Crystal Palace Junior Shield Contest, playing ‘Gems of Wagner No 2.’

Although no written explanation for his resignation can currently be found, that last appearance came just a week or so after he led the band to their last success at the Class C Contest at Fairford in Gloucester.

There they played a work entitled, ‘The Golden Age’ - a rather appropriate title for a man who gave so much of his life and dedication to the band.

Shaw was succeeded by Sam Mounfield who went on to conduct the band for 11 years. His sons, Eli Jnr and Vic carried on playing with Tredegar for many more years to come, with Eli finally retiring from playing in 1966.

In honour of his contribution to the band, the contest work ‘Romantique’ will be included on the first edition of the forthcoming Heritage Project CDs.

Through research at the Gwent Archives, it has been found that Eli Shaw died, aged 62, on 14th January 1945. His funeral service took place at St James Church, Tredegar on 18th January 1945. 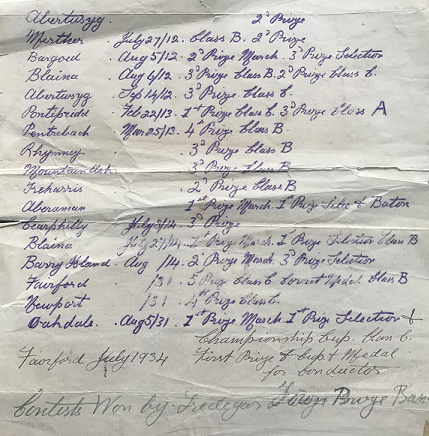