The immediate post War period proved to be an exciting one for both the town of Tredegar and its band - as shown by this concert programme from February 1948.

The town hosted a ‘Festival Week of Music’ that included a performance of ‘The Messiah’, as well as a piano recital by Julius Isserlis, a chamber music concert featuring the celebrated oboist Leon Goossens and an opening event that saw the combined forces of Melingriffith Works (Cardiff) and Tredegar Workmen’s Band conducted by the Welsh composer T. J. Powell.

The star soloist was a certain Harry Mortimer, who performed the cornet solos ‘Zelda’ and ‘Il Bacio’ in the first half and ‘Alpine Echoes’ and ‘Trumpet Voluntary’ in the second.

The concert also included a massed band performance of Powell’s ‘The Glory of Victory’, written in 1945 for Tredegar to perform at the town’s VE celebrations.

According to the programme notes it was written ‘...to portray a people’s determination to overcome the distrust, unrest and warlike tendencies which beset our world. This noble determination, coupled with a prayerful appeal to Heaven, leads to a glorious victory which culminates in the joyful, rollicking finale’.

The work is being recorded by Tredegar Band for a free Heritage Lottery Fund CD, which will be available to visitors to the bandroom and other organisations. 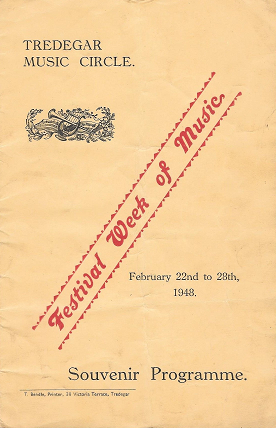