Much like the outcome following the outbreak of the First World War in 1914, the declaration on 3rd September 1939 by Neville Chamberlain to the nation that a state of war existed between Britain and Germany had profound effects on the town of Tredegar and for its band.

This concert on October 15th, took place just over a month later, with the band’s proposed appearance under conductor Sam Mounfield at the Second Section National Finals of Great Britain at the Crystal Palace in London, understandably noted in the programme as being, ‘postponed’.

However, the band still performed the test piece 'Gems of Chopin' that would have been used at the competition, to round off their contribution to the first half - one that also included a solo from trombonist Cornelius Buckley, who soon after the end of the conflict, heralded a new era by becoming the band’s conductor. 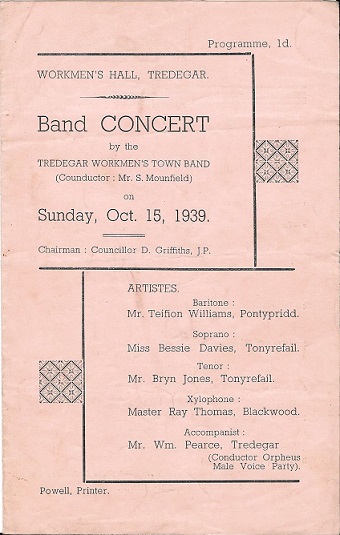