This wonderful pocket-sized ‘Book of Rules’ is believed to have been published during the early 1950s and was given to every member, player and committeeman of the Tredegar Town Band Society.

It sets out in 17 rules the constitution of ‘Tredegar Band’, and covers items such as how it is managed (by committee and officers), how often the band will rehearse (Friday 7.30pm to 9.30pm and Sunday 4.30pm to 7.00pm) and what action will be taken against band members who are ‘persistently absent’ (they were to be expelled).

Rule 7 made clear that ‘No bandsman shall be allowed to play, or enter the bandroom, under the influence of drink’ and that during rehearsal, the Bandmaster or Deputy would have ‘complete control’.

The Book of Rules was eventually set aside with the setting up of a new band constitution in 1974. 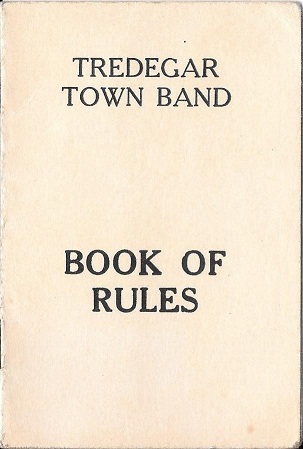