Following the end of the Second World War, the band was in desperate need in financial as well as musical rejuvenation.

A new conductor in Cornelius Buckley was appointed in 1947, whilst the committee was soon to be run by a determined and ambitious new Chairman called Reg Childs (a family name that would have lasting historical impact).

In July 1945 the band hosted the annual brass band championship of the South Wales & Monmouthshire Brass Band Association - one of a number held each year throughout the region. It took place at Bedwellty Park in the town, with the bands performing in the ornate Edwardian bandstand.

It marked one of the last contests of bandmaster Sam Mounfield, who had conducted the band since 1934.  They came third playing Verdi’s ‘I Due Foscari’.

The contest returned in 1948 (helped no doubt by at least three Tredegar Band committeemen also being officials of the Association).  It was held on Saturday June 19th and attracted 23 competitors in four sections, with the adjudicator being the renowned Dr Denis Wright.

According to the programme, all proceeds of the contest went in aid of Tredegar Town Band Funds, which according to the annual accounts of 1948, proved to be something of a poisoned chalice.

The event cost £140 to put on (plus an additional £1 band entry fee!), whilst receipts from the day amounted to just over £107, plus the addition of the prize of £7 won in coming runner-up in the B Section contest playing an arrangement of Mozart’s ‘Cosi Fan Tutti’.

Interestingly the band’s musical ambition was not dimmed, and although they lost out to Varteg Band in the B Section, conductor Cornelius Buckley also pitched them against the ‘big boys’ in the Class A Championship of Cory Workmen’s, Melingriffith Works, Parc & Dare and Tonypandy on the set-work entitled ‘Haydn’.

Drawn first, they did not come in the top three, but the foundation stone for future contest ambitions had been laid.

Less surprisingly, and perhaps due to the financial result to the band of the day, the contest did not return.

The programme was donated to Tredegar Band by Brian Buckley. 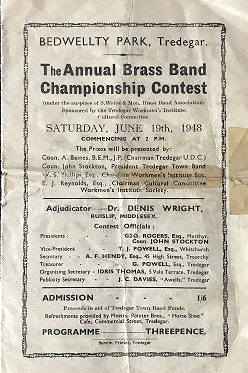