This handwritten letter is from Eli Shaw Junior, following his appointment as principal cornet and Bandmaster of Tredegar Workmen’s Town Band in 1904.  He was aged just 21 at the time.

Shaw was a remarkable musician. Born in Barnsley in Yorkshire on November 9th 1882, he was the youngest of five brothers, all taught to play by his father Eli Shaw Snr.

His eldest brother Stephen went on to become Bandmaster at the Oldham Rifles Band as well as being a solo cornet player with the famous Besses o’ th’ Barn Band, whilst Eli Jnr started to play the cornet with Barnsley Temperance Band before moving to the Kingston Mills Band, where he became an engineering apprentice at Ferranti’s Works.

According to a report given in the British Bandsman newspaper of March 1900, Eli was regarded as ‘... a very brilliant player and is much sought after’.

In July 1900, alongside his father, he was a member of the Denton Original Band conducted by Alex Owen that won the first National Brass Band Championship of Great Britain, held at the Crystal Palace in London.

In 1904, and owing to a lack of work at Ferranti, he applied for the position of principal cornet and Bandmaster at Tredegar, making a journey to the town in May, where an agreement, including help with employment in Tredegar Works, was made.

Interestingly, in his letter he states that his ‘professional teachers’ were a certain Mr Alex Owen and Mr William Rimmer, from who, he said; ‘I gained a great deal of experience.’ At the turn of the 20th century Owen and Rimmer were two of the greatest conductors and in the banding world.

In April 1905 he was the subject of a ‘sketch’ in the British Bandsman newspaper, in which he was described as being, ‘...of a quiet and unassuming disposition, and has made many friends, and if blessed with good health has a bright future’.

Eli Shaw Jnr remained a faithful servant to the band for the rest of his life (turning down the opportunity to move to the more affluent Hebburn Colliery Band just a few months after his appointment), remaining the conductor for 30 years until 1934, when following a period of ill health, he resigned.

His last success came at the Fairford contest in Gloucester in July 1934, playing ‘Gems of Melody No 2’ which featured excerpts from the compositions of Franz Lizst. His own sons Eli and Vic also played in the band, with the eldest, also called Eli Shaw Jr, playing cornet until 1966.

The letter was found in documents of the band held in storage. 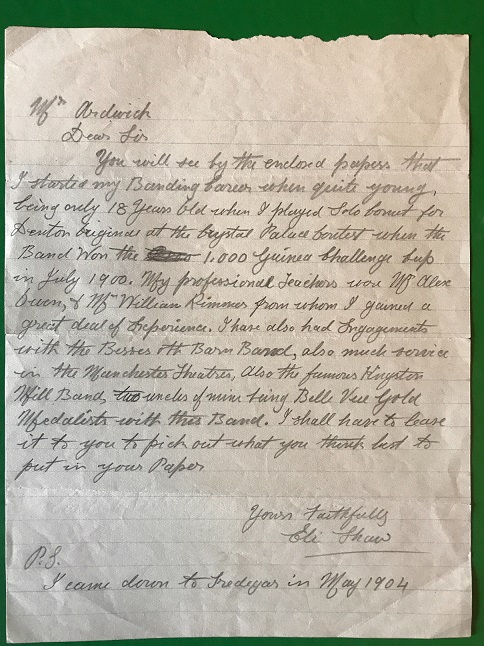